Tucker always has a reason.  ALWAYS.

It is certainly part of the spectrum.  Everything has a reason and it must be logical and make sense.  Part of this is because of the diminished ability to make inferences (see yesterday’s post about ice cream). Part of this is because he doesn’t like any sort of surprise.  Yet another part has to be due to him always having a plan.

As a parent I could never say, ‘Just because.’  That was never good enough and would lead him to an eventual meltdown.  While I believe that made me a better parent, it wasn’t always easy.

“Tucker, you may not have another piece of candy.  Candy is sweet because there is lots of sugar.  Sugar is bad for you in large quantities.  In fact, it can rot your teeth.”

Now he’s very careful about how much sugar he eats.

He has a reason and theory behind nearly everything he does, every step he takes, every decision.  It can be entertaining.  When he was in 4th grade I went to check on him in the shower and noticed there were wet footprints to the garage.  I looked in the garage, no Tucker.  So, I went to the shower.  Sure enough.  There he was – with his bicycle helmet on.

I had to ask.  I just had to.  This is one of those moments that autism rocks.  Yelling or accusing will simply shut him down – but if you are calm and ask the question you will often get an answer that will leave you speechless.

“Tucker, why do you have your bike helmet on in the shower.”

“Well, mom.  I was pretending to play football in here.  I was pretending because someday I will play for the Go-Hawks in the rain and it seems the shower would be the perfect place to practice in the rain.  But, then I slipped.  Then, I thought about how dangerous it was to play football in the shower.  So, I went and got my bike helmet.  That way if i slipped you wouldn’t find me with a cracked open head.”

Uh huh.  Fair enough.  This is just one of many examples of him having a plan.

But then…autism is always full of surprises.  Just when you think you have it figured out…you realize you don’t.

My husband bought a new gallon of milk.  There was still milk in the old jug.  Two jugs in the refrigerator. 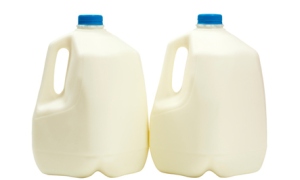 He was fully expecting a logical explanation and that would weirdly make sense and provide great conversation fodder.

Tucker responded, “I don’t know, I just drink it.”

There you have it.  Life on the spectrum.  Just when you think you know what you are going to get…bam…life appears as ‘normal’ as can be.