For most of Tucker’s life my main goal has been to give him the language and the skills to advocate for himself.  I’m fully aware that I won’t always be there.  It’s just a necessity that he learns and understands what is best for him and then advocate for those things.

I do not want to be a helicopter parent.  I may appear to be that…but I would simply argue that it’s a closer teaching than anything else.

If you read a couple of days ago you know that Tucker was NOT happy with his schedule.  He was NOT happy to have to make new friends.

At our school there is this thing called Advisory.  I’m still not sure what it is, but it seems like what used to be called Homeroom.  So, it’s a smaller group of students that get together with a faculty member.  They play games, they get to know each other really well, they laugh – it’s like having a faculty mentor/friend that they can go to for help.

In classic advocating form…here is what happened (after an hour of explaining why he doesn’t need to make new friends).

Me: Tucker, If you don’t like your schedule what should you do?  I can’t do anything about it.
Him: I should ask Mr. S [the school counselor]
Me: Yes.  You could do that.  Who do you have advisory with?
Him: Mr. W.
Me: Yes, and what is his job?
Him: The Principal.
Me: Yes.  What does he do?
Him: Kind of runs everything at school.
Me: You have an opportunity here.  You get Mr. W. in a small group setting.  If you really want something done about your schedule, ask him.  That way you don’t have to find time or track down Mr. S.
Him: Great idea Mom.  What should I say?

So then we talked about not only WHAT to say…but how to say it and when.  This is an AWESOME moment of teaching advocating.

Then last night he comes home all ready to tell me about his experience advocating for himself.  It. Was. Awesome. 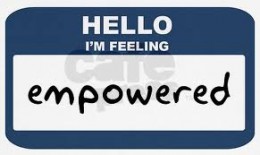 Did he just advocate to be done with his IEP???

I stared at my husband and he stared back.  Tucker went downstairs. I went into panic mode.

Here’s the deal.  Tucker is right.  He doesn’t so much need it this year.  You know why?  Over the past four years he has

Notice anything in that list?  Same.  He’s the King of the Jungle right now – 8th grade in a 5-8 building.  He has NO idea what is coming next year.  My head started spinning back to this place. Tears started rolling.  I do know what’s coming.  I know that he appears neurotypical.  I  KNOW this…people will not get him or give him a chance if they don’t know.

Transitions are inherently bad for him.  Always have been.  Maybe it will be fine – but I’m not willing to use a ‘maybe’ for him when it comes to education.

The real question is…what do you do?  What do you do when your child actually HAS been paying attention and HAS been learning from your lead? Drats.

Revert to your own mother’s advice, of course.  My mom would say, “You are the mom.  You are not the friend.  You have to do what’s right for him.”

I am so grateful that he has come this far.  His voice certainly matters, but I still have the veto power. It’s even more convoluted because I really dislike the IEP process -but I understand the value it has to his educational success. He’s come so far in large part because of his IEP…it would be like removing the safety net underneath a wire that is slowly raveling.

I told him that we would talk about this and that maybe our Special Ed time could look different than ever before.  I also told him how proud I was of him for advocating for himself and having the self-confidence to believe he no longer needs the supports.

So at this point…I guess I’ll just pray.

Then…when I raise my head I will send the Principal a message and tell him that is not an option until he’s through the transition of his Freshman year.  Then, yes – if everything is going well…then we will drop the IEP.