This is a real challenge.  I’m not kidding – whether you want to call it kidsitting or babysitting or something in between, it’s nearly impossible for those of us living life on the spectrum.

A couple of years ago I was talking to a young man who has a child on the spectrum.  He and his wife were going on a four-day trip and his mother was going to watch the children.  It took four hours to explain everything Grandma needed to know.  This is NOT an exaggeration.

Tucker’s primary years were easy – because he was an infant and his differences weren’t really that noticeable.  As we became more aware of his diagnosis it became very real.

It was difficult because how do you exactly explain to a Middle School/High School student:

Sitters were hard to come by and it often came to the ‘not worth it’ point for us.  If he went to bed 30 minutes late we would pay for it for days.  If his schedule was off it took at least a day to get him back into the routine.  However, it was also awful for some of the sitters we tried.  The screaming, the non-communicatio,n and honestly…the nakedness.

This is just one of the reasons that I often advocate for being part of someone’s village.

We faced all of these hardships…and then?  Then we found our beloved Brittany.

We found her at our church – but I know other parents find sitters for their very special children by calling local colleges/universities and talking with someone in education or psychology, referrals from someone on your team (SLP, OT, PT),  or asking someone else in your autism community. 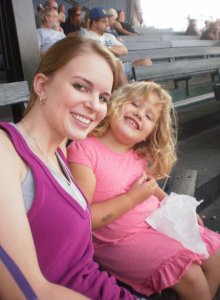 That’s OBVIOUSLY not Tucker…but it is our Brittany.

Brittany wasn’t just our sitter…she became part of our family.  This enabled her to really understand Tucker – and they had quite a unique relationship.  She never pushed, she always giggled, she always responded in kindness, she has a calm spirit, and she often came around…well…just to come around.

She also knew when to draw the line.  Brittany’s parents were also friends of mine and I knew our parenting styles mirrored each other – so when it was bedtime.  By golly, it was bedtime – and she stuck to it.

Most of all?  She really didn’t let a bit of it phase her.

She was a blessing in our early years – giving us breaks from the impending insanity.  Allowing reconnection and adult visitation.  She was not just our babysitter – she was our sister, daughter, and friend – and I will always, always have a very special place in my heart for Brittany.

She will forever be part of our family.