Last night a group of friend’s gathered.  We have a friend who recently ran into a burning building to save a child.  That’s not a joke…

I asked him to retell the story and it went something like this.

He and his co-worker were laying concrete in the area when they noticed the fire at the duplex.  They rushed into the house.  When he went upstairs he found the 3-year old in a corner with 3-4 ft. tall flames around him.

He described the situation as insanely loud.  He said it sounded like there were six smoke alarms going off in one room and the child was in the corner with his fingers in his ears, blocking out the noise.

I couldn’t help but to think of Tucker.  How would he react with the loud noises, the smells, the smoke in his eyes, the confusion, the ‘out of ordinary?’  I don’t know – but it frightened me enough to do engage in researching on this rainy Sunday.

Dwight Good wrote about these challenges in the March 2011 issue of Fire Engineering.  While I could try to develop ideas and strategies for how to help our children cope with a fire emergency, Mr. Good sums it up nicely.

From his article, Autism Spectrum Disorder:  A FireEMS Challenge,

Children with ASD often have increased sensitivities to auditory, tactile, and visual stimuli. These heightened sensitivities place them under constant stress, which complicates matters for them during crises. Overstimulation is a significant problem for children withASD.

Pain or stress may lead the person with ASD to try to escape or dart around without any particular direction and misdirected aggression. They may talk to themselves, talk loudly, rock or focus on a particular part of the body, and engage in self-injurious behavior or attention seeking behavior or tantrums. None of these activities are conducive to self-preservation.

In one study, 70 percent of parents caring for a child with ASD reported that they could not leave their child home alone; almost three-quarters of the respondents reported that they use alternative locking and latching devices on doors and windows to prevent their child from escaping. This is a significant concern for the majority of families caring for a child with ASD.15 Forcible entry is often necessary in structure fires where people with ASD live or are cared for, and these occupants are likely to hide from rescuers or become combative in situations where they must be moved quickly.

Several groups and parties across the United States offer training programs that make emergency responders aware of the signs and behavioral risks associated with ASD and provide effective approaches for working with these patients. Most of these programs are offered for a fee. This can be a problem today when the operating budgets of most emergency services agencies have been decreased, some quite dramatically, in response to the recent economic downturn, leaving little room for new expenditures in training.

Almost two-thirds of the respondents in one study on families with children with ASD believed that visual aids or pictures were the most effective means of teaching fire safety; another third preferred videos.  Subject matter experts disagree with these approaches. Although video modeling can be used to teach specific skills or behaviors to children with ASD, the research does not indicate that the students will be able to apply the lessons learned in one application to actual events that differ from the scenarios or examples taught.

Social stories and visual reminders are commonly used to teach children with ASD new concepts and skills, including fire safety (e.g., smoke alarms, fire drills), and visual reminders (e.g., a “do not touch the oven” sign) are often used to help the children remember what they are supposed to do or not do.

The National Fire Protection Association offers the free social story “I Know My Fire Safety Plan” on its Web site. It was designed to teach children with ASD what to do when a smoke alarm sounds. I shared the link with the teachers and specialists I met during this project, and the feedback was highly favorable.

Fire and life safety educators must team up with local experts to ensure that the messages delivered are consistent, appropriate, and complementary. These messages must also be delivered to the families in their homes and perhaps frequently. Although this approach requires more effort than most of our public education programs, it also presents the greatest potential for reducing death, injury, and illness rates among members of a high-risk group. I recommend recruiting local advocates and parent volunteers from the autism community to help.

Members of this public education team should be carefully selected, and curriculum, lesson plans, format, and lesson delivery should be developed through partnerships with subject matter experts. The approach must be holistic: It will be necessary to involve family members and caregivers; address all aspects of life; and ensure that the messages received are consistent, complementary, and frequent.

Just another reason for those in the ASD community to continue advocating and teaching.  We will begin social storying in tonight.  Our first step?  Setting off the alarms so Tucker knows what they sound like – I’m going to do that several times this week.

Then, we’ll talk about his escape route – but not simply talk about – we will practice.  No pretending – we will teach him how to climb out of his window and where to go once outside.

I know this is something we should have thought about long ago.  We’ve always ‘talked about’ the plan and what to do – but for some reason I never really thought about the environmental overload that could happen.  This overload could prevent his normal thought process, so we need to practice until it becomes second-nature.

The overload may not happen…but I’m not taking the chance. 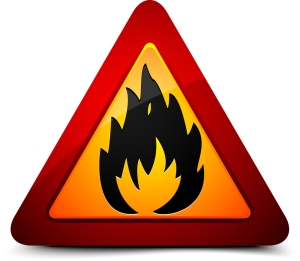