I recently saw a baby and his mother was explaining to me that he was hot, therefore not wearing any socks. First, I love young mothers.  I used to be one of them…feeling like you need to justify all of your choices to someone else.  Mama, no worries – your child will be fine, socks or not. In fact, it looks like you’ve combed your hair in the past couple of days.  Congrats!

I had to laugh…it reminded me of our once (and continual) sock issues.  To my friends in warm climates where socks are not always necessary – I long to be you.

When I look back it was one of the first signs that I would have never recognized.  I just thought that all children hated wearing socks…like really, really, really hated socks.

I’m not a fan of socks, so I figured if nothing else – it was hereditary.

Wrong on all accounts (well…sort of).

Tucker took off his socks everywhere.  I don’t just mean took his socks off.  He would RIP them off with a high level of intensity and veracity.  High levels of intensity EVERYWHERE – it didn’t matter where we were, who we were around, or the temperature.  The socks were coming OFF.

This was a smaller piece of the sensory issues we faced – hypersensitivity to touch. 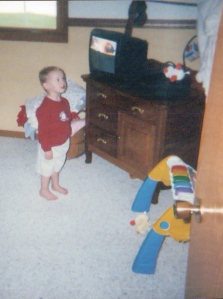 He was taking his socks off EVERYWHERE. Now, I understand that many children remove their socks – this was just different.  In the way we experience autism – it’s ‘typical,’ and then there is that moment…reread Day #14 – The Moment.

He’s developed great coping skills though – he used to take them off anywhere and everywhere.  Now, he will at least wait until we get somewhere more appropriate (like in the car after school).  Let me add to that – the new puberty scent of those socks in my warm vehicle.

When he was younger he would subsequently SCREAM when I put the socks back on. Now, I don’t mean just yell because he didn’t want them on.  I mean a full screaming, hitting, cannot talk him through it kind of meltdown.

One day when he was about four I took the laundry out of the dryer.  As I was matching socks I recognized the seam of the top of the sock.  It was at the point that I knew something was going on.  He had been diagnosed with Sensory Processing Disorder.

That night I turned all of his socks inside out and put them back in his drawer unmatched.  The next morning while we were getting ready I told Tucker to put his socks on.  He began to scream and I calmly said, “Tucker, I know you don’t like socks.  I bought you some new socks last night.  I want you to try them. Then you can have a popsicle.”

He tried them.  He stood in front of me staring down, wiggling his toes.  All of a sudden I knew it – he was trying to feel that seam.

He smiled and nodded.

I handed over the popsicle.

For the next year I turned all of his socks inside out and we NEVER had another issue.  During that year I searched for socks with a minimal seam.  One of the greatest pieces of advice I ever had was to think about ‘progressive coping.’  Start where they are and then little by little help your child get through their sensory difficulty.

Then, I found a type of Hanes socks that had a tiny could-barely-be-seen-seam.  I snuck a pair in.  He didn’t react.  I bought six more.  I snuck them into his inside out collection.  One by one over the next couple of years I would get rid of the inside out socks.

Then, another year went by and I began to sneak in more ‘regular-seamed’ socks.

One by one over the next couple of years I would get rid of the could-barely-be-seen-seam socks.

This process continued until he was nine…when finally, the seams were no longer an issue!

Well..they are still an issue – but at least he can wait until a more appropriate time to remove the socks and then remove them without the melt-down.