Riding a bike.  Many a child’s favorite pastime.

I remember it fondly and clearly.  I was four.  It was a beautiful sunny June day.  My brother held onto the back of my pink banana seat as I pedaled around the gravel yard at my parents’ farm. 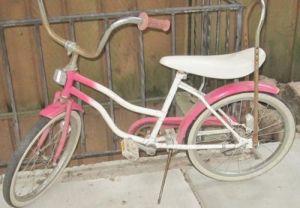 My parents didn’t believe in ‘training wheels.’  (Now as an adult I wonder if they just couldn’t afford to buy us a ‘training wheel set/bike.’) He kept telling me I could do it; he stayed behind me the whole time, encouraging me.  I was trying so hard to believe him.  Finally, I took the chance.  I sat up tall…the wind blew through my blonde curly hair (before bike helmets). I exclaimed, “I’m almost doing it, don’t let go yet.”

He responded (in what sounded like a quiet voice), “I alllrreeeady did.”

I turned around expecting to see his deep blue eyes looking back at me.  Instead, I realized the quiet voice was the result of him being 20 foot behind me.  He was jumping up and down and waving his hands in the air, “See!  You’re doing it.”  I’ll never forget his smile, his cowboy boots, and white t-shirt.

I was having the BEST. DAY. EVER.

Then, I crashed into a pole.

No worries though…just a couple of scrapes (and a lifelong fear of turning my head while on my bike).

What a moment – iconic, for sure.

It’s one of those moments that most (dare I say…all?!?!) parents get really excited for – the first time your child rides their bike.  It’s yet another ‘first’ that is fraught with stress and frustration for parents on the spectrum.

Riding a bike doesn’t come easy for many children on the spectrum.  It was the first moment that the ‘physical’ struggle of autism became painfully obvious.

Many children with autism have an intense fear of not having their feet on the ground (part of their vestibular sense–see below).  I know – a bike isn’t that far ‘up’ – but it was the same with scooters, taking the first step up a flight of stairs, and any type of amusement ride.  They need their feet on the ground.  It’s part of them feeling ‘grounded.’ (see Day #7 – Seven Senses) If you understand the need to feel grounded – the difficulty that comes with riding a bike makes perfect sense.

It scared him, terrified him.  He would scream and sob.  His gross motor skills were amazing – but this wasn’t about pedaling.  This was about something that we couldn’t practice.  This was something different, but we kept trying.  Every week, every summer.

On a warm April day.  I was behind him…the first outing for the year.  I hugged him, loved him up,  and said, “Tucker, it’s okay.  If you can, you can.  If you can’t, you can’t. I love you regardless.”  His hazel eyes looked into mine, tear filled.  Finally, he rode off.  He stopped.  He got off his bike.  He came running at me.  Tears streaming, “I finally did it mom, I’m like the other boys now.” Yes, you certainly are Tucker…

Watching your child ride their bike for the first time is always an amazing moment.  Estelle learned that same day (she was in Kindergarten).  My laughter was large, my smiles were gigantic.

Watching your child ride their bike for the first time after attempting to ride it for three years?  That moment is unexplainable.  It’s unbelievable.  It’s amazing.

After the light?  More dark…

I wasn’t expecting each transition to a new bike to be as rough.  I mean – he finally learned how.  He knew it wasn’t scary.  He finally grew comfortable with his feet off the ground.

Only not – because a new bike meant a larger distance off the ground.  He received a new bike for his 10th birthday (his knees were literally above the handlebars).  He’s used it four or five times.

Last year we drove to the bike trail – just to get him riding again.  Tears again.  Yes, tears. 12-year-old tears combined with ‘I don’t want to’ sobs and near hyper-ventilation.  Not because it hurt, not because he didn’t know how – but because it was scary.  The bike takes away his ability to be grounded, to be in full control of his body.

So, every new bike means a new learning process.  It means me hanging onto the back.  Negotiating and bribery…anything to get him back on the bike.  Why?  Some have told me it’s not a big deal.  Others have told me to stop trying.  Still others have said – let it go, it’s not worth it.

It’s not a big deal.

I could stop trying.

It may not be worth it.

But it IS a big deal, I will NOT stop trying, and it IS worth it.

That bike is a constant reminder to both of us that he is different.

It is a HUGE deal for him to know with enough persistence, practice, and patience that he can DO ANYTHING.  So that’s why we keep on…it’s why I hold on to that bike, even if just 10 feet.

So he knows that he can.

It’s a small lesson in the game of life that will help him win the race.

_x_ may be fearful of, and have difficulty riding a bike, jumping, hopping, or balancing on one foot (especially if eyes are closed)

For more information on the vestibular system, see: